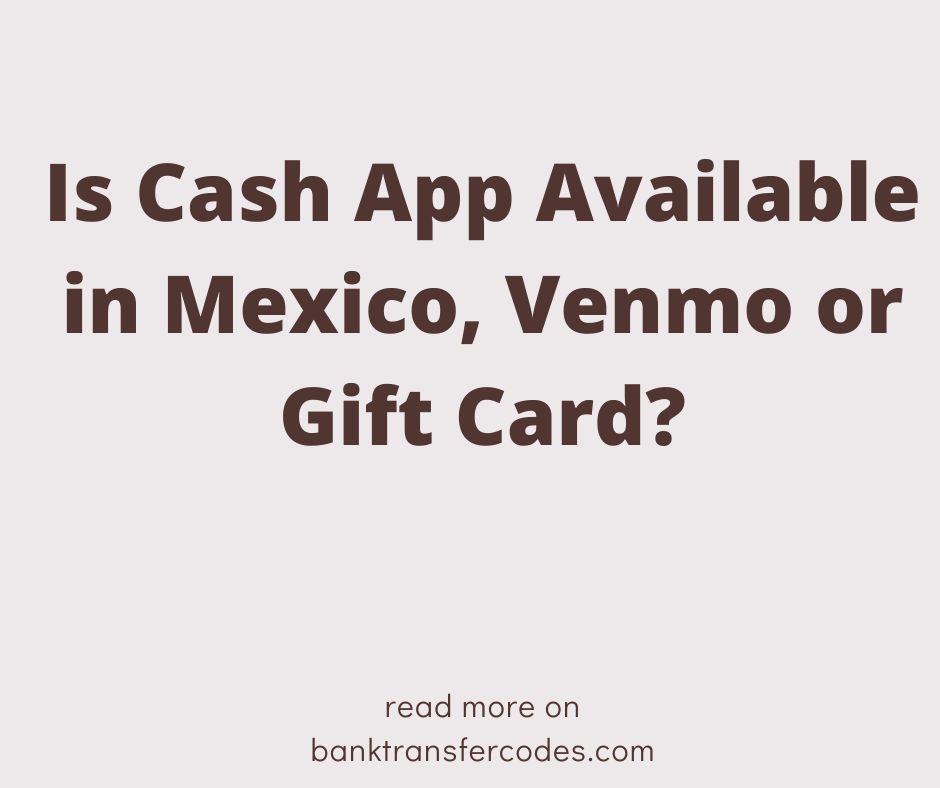 The Cash App seems so convenient for sending and receiving money in the US that most Americans tend to think it’s ubiquitous. Imagine their surprise when they leave for a neighboring country like Mexico only to discover they’re unable to log into their Cash App account.

If you’re in this difficult position, you may want to ask: is Cash App available in Mexico? If it isn’t, you may also want suggestions for some interesting finance apps you can use during your stay in the country.

In this article, I’ll answer all the questions you might have about Cash App and Mexico. After clarifying whether or not the app is available from the neighboring country, you’ll also get answers to some related questions that will better help you understand how the app works.

Is Cash App Available in Mexico?

At the moment, Cash App is still not available in Mexico, as the app is only for people living in the US and the UK. Also, we haven’t learned of any plans to bring the app to the South American country, so you might want to keep your expectations low when it comes to using Cash App in Mexico.

In the same vein, you don’t have to use Cash App in Mexico. There are lots of other payment apps that work outside the United States, and many of them are particularly great for a country like Mexico. Instead of trying to let Cash App work in Mexico, you might want to consider getting an app that works natively.

If you have to use Cash App, however, you can do it by using a workaround that tricks your device into thinking that you’re in the states. Since Cash App is a finance app, I won’t recommend you to use any ‘tricks,’ as the direct consequence of Cash App not trusting you is you losing your money.

What Cash App Works in Mexico?

If you have to send money to someone in Mexico (or if you’re in Mexico yourself), you have to find an alternative to Cash App. Thankfully, there are tons of other alternatives that work almost as well as Cash App, with some of them being low-fee options.

Here are some of the apps that will let you send money to Mexico for almost no fees.

If you have a functional PayPal account, Xoom is probably your best shot at sending money to someone in Mexico. It’s even better if you’re trying to send a lot of money while trying to avoid a transaction if that’s exactly what you’re after.

When you send money to Xoom, the recipient can pick up the cash at one of the designated pickup locations or have the money deposited into their account; it never gets any easier to send money internationally.

MoneyGram is another convenient way to send money to someone in Mexico, especially if speed is one of the qualities you’re seeking. There are many pickup locations for people trying to receive money sent through MoneyGram, and while transfer rates aren’t the lowest, they’re not the highest either.

If you want your recipient to pick up the money without considerable costs to either of you, Remitly is undoubtedly the way to go. The biggest strength of using this option is the sheer number of pickup locations it has across Mexico, but the low fees are a pretty big strength too.

There are two options for transferring money using Remitly: you can either have the money delivered within minutes or send it with a waiting time of a couple of days. Of course, the former costs more than the latter, but you shouldn’t be paying an extravagant amount either way.

Listing Western Union among the best ways to transfer money in Mexico is probably not very helpful, as pretty much anyone knows they’re the best around. If your recipient stays in a remote part of Mexico, the only options you have are Western Union and MoneyGram.

One downside of using Western Union for transfers is the cost: it will differ depending on the amount you’re trying to send, but trust me, it’s not going to be anything.

Does Mexico Use Venmo?

If you’re after alternatives to Venmo in Mexico, pretty much every option mentioned earlier works. Venmo and Cash App work for almost the same set of things, but the fact that you can’t use both in Mexico even makes them more alike than they are different.

Are They Using Gift Card in Mexico?

Gift cards are prepaid debit cards designed to hold a specific amount of money that you can use to pay when you purchase items from specific stores. Different financial institutions issue gift cards, and in most cases, you can only use them in select stores.

If you have an American Express gift card, for example, you cannot use it outside US stores. While Mexican stores will allow gift cards that are designed to work in Mexico, most US gift cards will not work in Mexico. So, you may want to think twice before sending your American gift card to your Mexican friend.

Can You Use Cash App at Restaurants?

Cash App is not available in Mexico at the moment, but there are so many alternatives that you don’t even need the app for money transfers to Mexico. Even if you’re trying to send money to someone in the UK, a country where Cash App is supported, you still can’t send it through Cash App as long as you’re in the US.