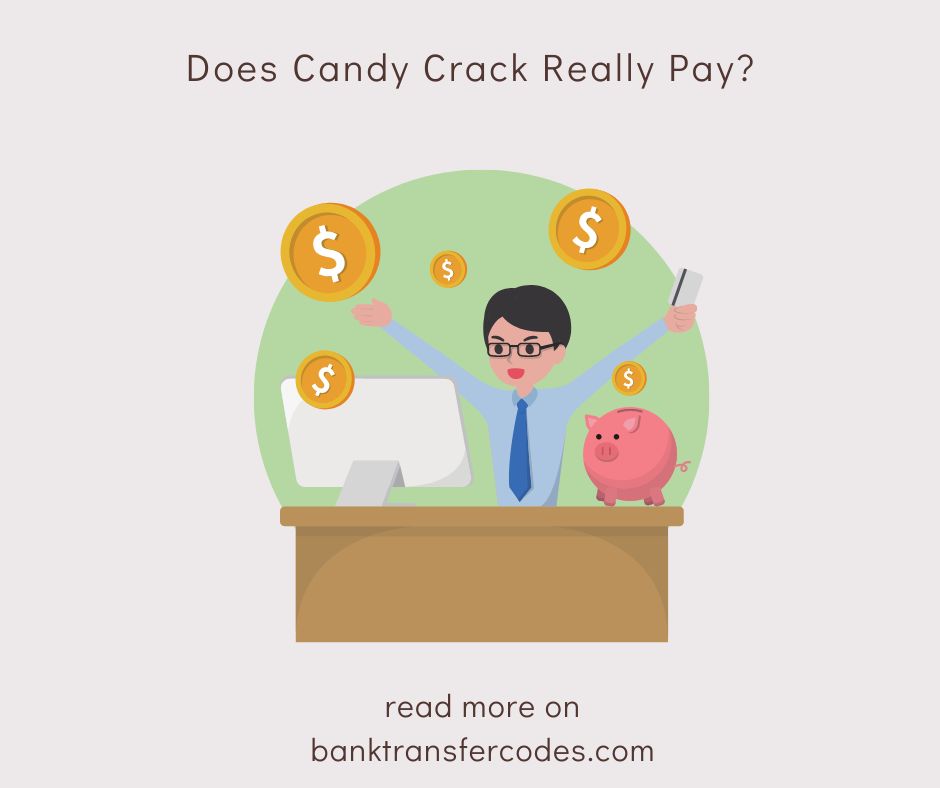 The ability to earn cash while playing the game has people questioning whether candy crack really pays or it’s just another scam app that promises lots of exciting rewards and fails to deliver payments in the long run.

Before you choose to download and install the game, it may be nice to gain a heads up on what to expect when you try out the candy crack game. For starters, you should be ready to watch a lot of ad commercials when you play the game.

Let’s take a look at the concept of the candy crack game, what it’s about, how you can earn from it, and how to claim your cash rewards.

Candy Crack doesn’t pay any money to their players. Your waste your time playing the game accumulating coins that you can’t redeem. This game; initially paid players to gain the number of users that they needed and gain popularity. They’ve stopped paying their users now.

The candy crack game has received a lot of critics and appraisal on the web. However, judging from the reviews on the Google play store, we can tell that the candy crack game is just another scam app. Diverse users report the game to be misleading, annoying, and a waste of time.

I took the time to try out the candy crack game and discovered that the app is just another fallacy. I dedicated a lot of time and effort to playing the game and was on a winning streak of winning lots of cash rewards.

However, things took a different turn when I stopped getting rewards from the app. I thought it was some sort of app glitch, and I tried updating the app. I also tried uninstalling and reinstalling the app to see if that fixes the glitch.

In addition, I tried leaving a message for the customer support team and never got a meaningful response that explains the reasons why my rewards had been frozen or stuck. A friend of mine who was also busy with the candy crack game experienced the same issue while playing.

The app developers understand that it is impossible to initiate a cash withdrawal without having the minimum balance in your virtual account, which explains the sudden freeze of earnings.

The freezing of earnings is intended to build up controversies among people because a lot of people will be unsure if they are going to get paid. In most cases, a few persons might be feeling lucky and may feel they’ll be lucky enough to get paid in the long run.

A certain user complained of having earned over $950+ before he noticed the freeze in his earnings, and he never got paid after trying everything possible.

Do note that it’s not everyone who experiences the freezing of rewards earnings while playing, but people who are lucky enough to accumulate over $1,000 claims that they usually stumble on a different roadblock when they try claiming their rewards.

Some of the complaints include having to watch tons of video ads or having to consistently visit the app for over 300 days.

The app developers may also choose not to pay you after earning $1,000 under the pretense of claiming you weren’t playing fair. For example, Thomson was accused of carrying out unusual activities to increase his chances of earning after he earned a thousand dollars while playing fair.

You may thus choose to keep playing the candy crack game irrespective of the aforementioned comments about the game, or you may decide to stop abruptly.

Concept Of The Candy Crack Game

This puzzle game was designed by Sophia Games which requires you to click on a minimum of two similar candies to get rid of them. As you proceed with playing the game, you will be rewarded with in-app money and coins which said you can cash out using Paypal, Amazon gift cards, and cash app credits.

If you are yet to try out the game, you should be comfortable with watching a lot of video ads. The more ads you watch, the more your chances of playing for additional cash rewards. The app creators in turn make money off the more ad videos you watch.

How Do You Play Candy Crack?

You are expected to download and install the candy crack game in other to unlock your chances of competing for cash and other enticing reward options. The candy crack app requires permission to access your files and media library.

We are not sure why the app requires access to view your files and media library but the app has not been reported to cause any harm. You may then choose to install ànd keep the app or you may uninstall the app because you can’t use the candy crack app unless you allow the app access to your files and media.

One thing you should know before playing is that the game is very easy, and anyone above the age of 10 can play the game without much hassle. All that’s required of you is to play to eliminate candles. This can be achieved when you play by the game rules, and that means selecting two or more candles having similar features.

You can always see how you’re making progress with the app at the top of your screen. You can thus receive coins and cash rewards when you successfully pass some set limit in the progress bar, and you can multiply your earnings when you watch a short video ad.

You can also unlock more reward options when you keep playing the game. Other rewards you can unlock include the scratch card option where you will scratch cards to win cash and other prizes. You may also try out the Lucky raffles and slot machine options in other to win additional prizes.

The candy crack game also gives you a chance of earning other prize rewards such as a smartphone device. If owning a new smartphone sounds interesting to you, you are required to launch the app and select the iPhone icon on your phone screen where you will then see how to win a smartphone and other mouth-watering prizes such as a PlayStation, a MacBook, smartphone, etc.

Do you know that you also stand a chance of earning cryptocurrency with the candy crack game? Selecting the iPhone icon on your screen allows you to compete for a chance at earning Cryptocurrency. What’s intriguing about this is that you are going to be opportune to earn the world-leading cryptocurrency “Bitcoin”

When Can You Cash out On Candy Crack?

It’s easy to play the candy crack game, and accumulate cash rewards. Cashing out your earnings is usually next in line after you’ve passed all withdrawal requirements. For starters, you are not expected to have accumulated anything less than $1,000 before you can think of initiating a withdrawal.

Upon successfully meeting the withdrawal requirements, you can then receive your rewards in your PayPal account, or using the gift card option.

You are expected to leave a residential address on the app when you win other exciting rewards such as a MacBook, smartphone, etc. You must also provide your Bitcoin wallet address if you are lucky to win BTC in the game.

It’s all fun and rewarding, but the possibilities of getting to earn free smartphones, MacBooks, etc are slim because the app creators clearly stated in their T&C that they are not to be held liable if a player fails to play by the rules.

It’s then recommended that you play fair, in other to receive your cash rewards and other exciting rewards.

In conclusion, playing the candy crack game is a perfect way to waste your time and effort. Although, there have been some payment proofs on the web, be assured that those payment proofs are meant to confuse you, and give you the zeal to keep playing while hoping to earn exciting rewards.

You may choose to do something better with your time rather than staying glued to a non-rewarding game that also displays lots of annoying ads. The ads are intended to enrich the app developers who get paid for each view the video ad adverts get.

You may thus choose to keep playing the game, but do note that the app is just another fake app, and it isn’t worth your time and effort.