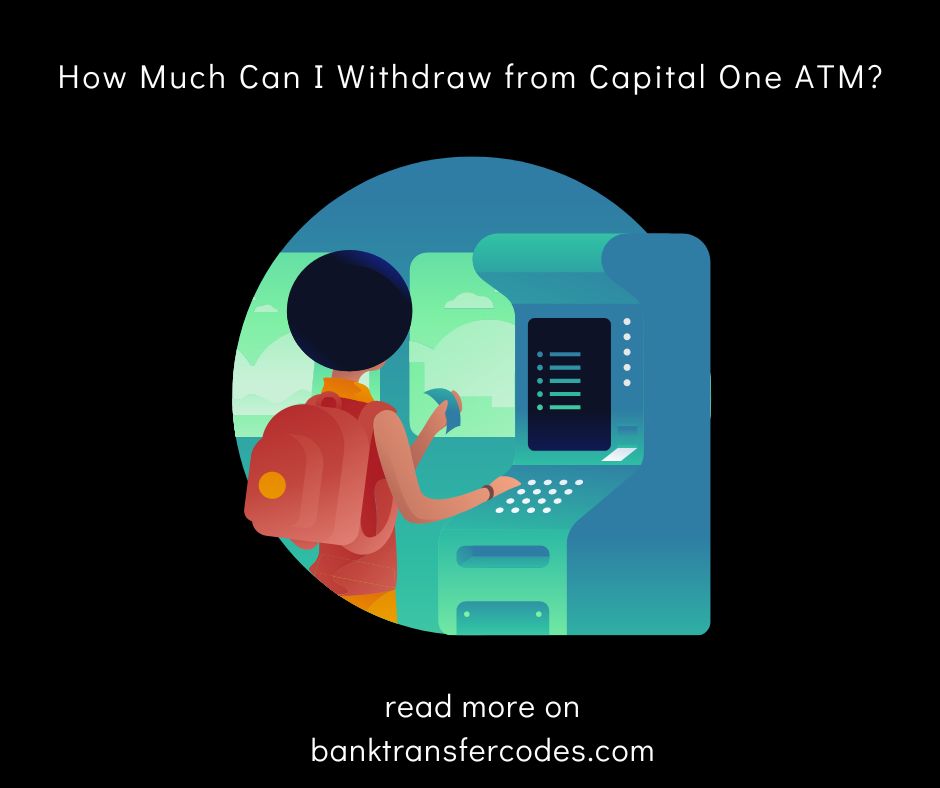 You’re near a Capital One ATM and you have a debit card with enough funds for you to withdraw. Since you need cash urgently, you need to know how much you can withdraw from Capital One ATM in one go to determine if it’s enough for the quantity of cash you need.

Answering that question is predictably difficult since there are lots of things we don’t know. How much do you have on your debit card? Is the card from Capital One Bank? What’s your bank’s ATM withdrawal limit for that specific card?

Those and more are some crucial questions that need answers before you can get an answer to how much you can withdraw from a Capital One ATM. In this article, we’ll go through many hypothetical scenarios to see how much you can realistically withdraw in most cases.

How Much Can I Withdraw from Capital One ATM?

When talking about the limits associated with your Capital One Bank debit card, it’s crucial to state a period. Most banks have different daily, monthly, and weekly limits that don’t add up most of the time; is Capital One part of them?

For Capital One Bank accounts held by individuals below the legal age (18), the withdrawal limit is capped at $500 per day. If that sounds restricting, you should know that not many banks will let you withdraw money from an ATM if you’re less than 18, let alone allow you to withdraw up to half a grand.

For under 18 Capital One Bank debit card holders, there’s no specific monthly or weekly limit; you can withdraw the daily limit all day long, and even all week long. If you’re doing that, however, don’t be surprised if you got invited to the bank for a talk.

Regular Capital One account holders can withdraw $1,000, which is twice the withdrawal limit for under 18 users. This limit is better than what you’ll get at most similar banks, but it isn’t the best offer out there. There are also no monthly or weekly limits, so, you can theoretically withdraw $1,000 every day all month long, provided the ATM outlets near you can give you that.

You should note that this limit only applies if you’re holding a 360 checking card. If you hold a non-360 account, however, the limit will drop to $600 for debit cards from the bank. Again, there’s no specific weekly or monthly limit at play here, so you can have fun.

Before walking to just any ATM outlet to withdraw $1,000, you should only expect to be able to withdraw this much from one of Capital One’s ATMs. For out-of-network machines, you’ll first have to pay a charge for each withdrawal, and you may not be able to withdraw as much as quoted here.

That point brings me to this: in most cases, you won’t be able to withdraw the entirety of your ATM limit in a single transaction. If that’s the case, you may have to stage multiple withdrawals, which will indie multiple charges if you’re using an out-of-network ATM.

Why Does Capital One Have Withdrawal Limits?

Something many people don’t seem to understand is why banks must always have ATM limits. It’s your money, it’s your account, and it’s your card; why must Capital One or any other bank limit how much you can withdraw from the account for any reason?

There are a couple of reasons why your Capital One debit card has withdrawal limits. The most important one, at least in my opinion is that a bank can only hold so much money. Since you’re not the only person trying to withdraw money from the ATM for the day, they have to impose some form of limit to ensure money goes round.

Another possible reason is to control how much your account could lose in the event of fraud. If someone got hold of your debit card and the associated PIN, they could theoretically withdraw all of your money if there were no withdrawal limits in place.

Also, banks want to control how much money they keep within, and they can only do that by selectively controlling how much they can access. By making it impossible to access huge amounts of money at once, they make it impossible for users to get all of their money back, which is an excellent way to ensure they have enough money to go around.

How to Get More than Your Withdrawal Limit on Capital One

While the maximum you can withdraw from an ATM using your Capital One debit card normally is $1,000, it’s possible to access even more than this if you need to use more cash. So, how can you withdraw more than your regular withdrawal limit?

The most common way to withdraw more than your limit is by asking for an increase from the bank directly. You can contact the bank’s customer support over the phone or email and let them know you’ll need a temporary increase on the withdrawal limit for your debit card.

The bank reserves the right to reject your request, but you have a good chance of success, especially if you hold the bank’s 360 checking account. If you’re a minor, however, there’s a pretty low chance that you’ll be able to get Capital One Bank to increase your daily limit.

Can You Use a Cash App Card at ATM?