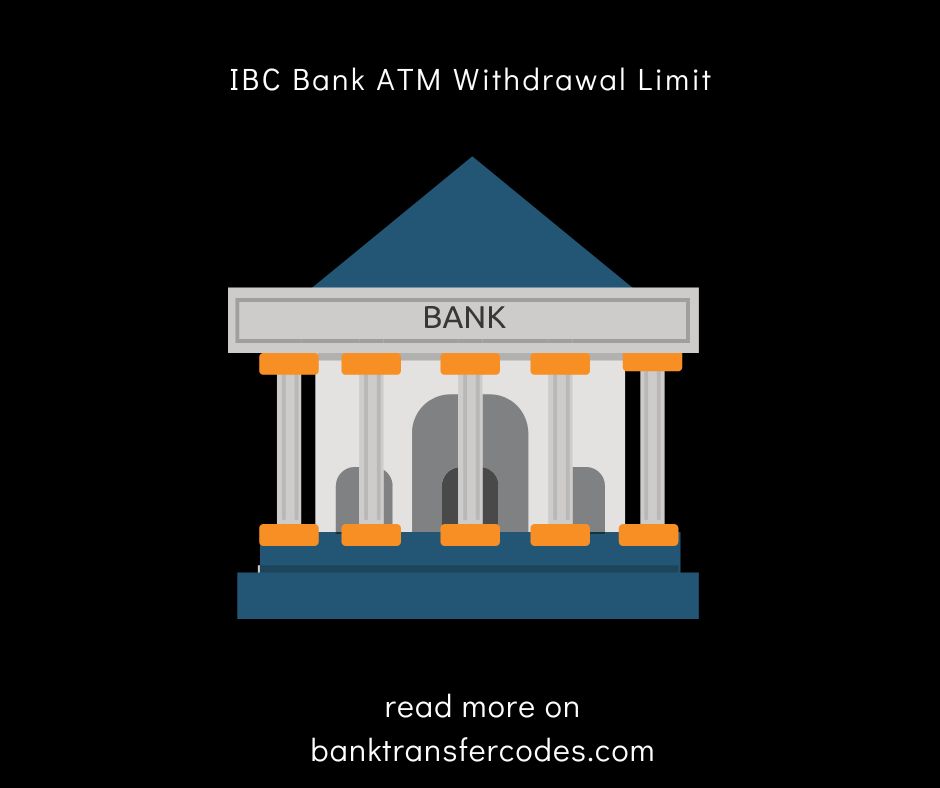 Unless you’re a newbie to commercial banking, you should already know there’s a limit to how much you can withdraw from an ATM at a time. Also, that limit differs from bank to bank, with some banks tending to have more generous ATM limits than others.

If you’re in Texas, specifically near a branch of the International Bank of Commerce (IBC), you may want to consider creating an account. However, one of the biggest factors that should come into play before choosing a bank, especially if you seem to use a lot of cash, is their ATM withdrawal limit.

In this article, you’ll learn about the limits for ATMs within the IBC Bank network when you hold an account with the bank. You’ll also learn about some other crucial limits, like the deposit limit, in case you’re trying to deposit a check or notes at the bank.

Now that you can locate the nearest ATM in the IBC Bank network, it’s time to figure out exactly how much you can withdraw from any of the bank’s ATMs. I’ll also compare the withdrawal limit for IBC Bank to similar banks around to see how it holds up.

According to data from multiple sources on the internet, the IBC Bank withdrawal limit is $700 per day for customers operating a regular checking account. While corporate and business accounts generally have higher limits, that’s what you should expect as a regular individual operating an account with the bank.

Ordinarily, $700 doesn’t sound like a terrible amount of cash to have handy. However, when you compare the amount to what you can get from some other banks around, you’ll notice that a better choice isn’t even hard to find.

Bank of America, for instance, pegs its daily ATM withdrawal limit at $1,000. You can get up to $3,000 at Chase Bank, depending on what kind of account you’re holding while Citi Bank gives you anywhere from $1,500 to $2,000 per day as a customer with a checking account.

If you tend to deal with a lot of cash per day, you should consider creating an account with some other bank. However, if you already have an account with IBC Bank, you may have to find a way around the ATM withdrawal limit, which is what I’ll be discussing in the following section.

How to Get Around IBC Bank ATM Withdrawal Limit

You don’t have to endure a measly $700 ATM withdrawal limit; if you want more cash, there are always ways around the limit that you can try. While it isn’t certain that a particular method will get you past the limit, there’s a pretty good chance that you’ll be able to withdraw more than the limit when you try multiple at once.

Here are some clever ways to try getting around the IBC Bank ATM withdrawal limit to access more cash.

You’re not the only one who thinks the withdrawal limit at IBC Bank is insufferable; chances are that many folks at the bank also share your view. To get more money than the ATM withdrawal limit will allow you, you may want to consider calling those folks and asking for an increase politely.

When you ask IBC Bank to increase your limits, they’ll likely take a look at your history with the bank and either approve or decline your request. If you tend to withdraw cash somewhat frequently, there’s a better chance of getting approval. On the other hand, if the request is coming out of the blue, it might as well be a scammer who got access to your debit card trying to withdraw as much as they can.

In most cases, the increases you get to your withdrawal limit are only temporary. If you’re out for a permanent increase, you should specify, but there’s even a higher chance of failure.

In short, you head over to a store, make a low-price purchase, and try to go for the highest cashback you could get. If you have enough time, you can keep repeating this, but across different stores to get as much cash as possible at the end.

If the two preceding options seem not to work, you can try cashing a check to get more than an ATM will dispense in a day. As long as you have enough money in your account, you can write a check, sign it, and head over to a cashier in the bank to cash the check.

Talking about cashing checks, IBC Bank lets you deposit checks to your account directly through an ATM without having to interface with a banker from the bank. The following section will explain how that works and the specific deposit limits you may be subject to when you deposit using a check.

While most people only use ATMs for withdrawals, some ATMs in the United States will let you do more than simply withdraw money. The IBC Bank smart ATMs, for example, will also let you deposit checks and have them credited to your account, as long as you have access to your debit card.

Unlike withdrawals, there’s no predefined limit as to how much you can deposit at an IBC Bank ATM on any given day. While there’s likely to be such a limit, the bank prefers to keep it within, only inviting you to explain the source of funds when you try to go over the limit.

With that said, you should always consider walking into a bank if you’re depositing huge wads of cash. While IBC Bank accepts cash deposits, they’re usually not available immediately, and it’s generally much safer to walk into the bank for your deposit instead.

IBC Bank is one of the better banks in the United States when it comes to deposits and withdrawals at ATMs. As for the limits, you can only withdraw up to $700 per account per day at IBC. For deposits, the bank’s machines accept both cash and checks, but you’re safer entering the bank for larger cash deposits.