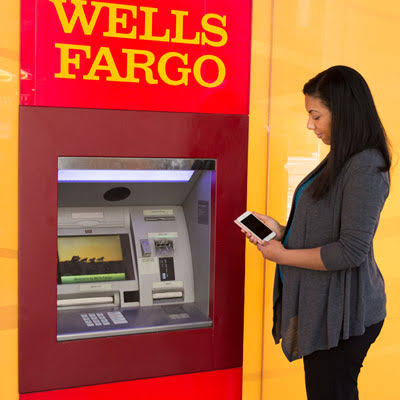 Wells Fargo ATMs are pretty powerful, being one of the most fully-featured banking ATMs you can find in the United States. Without compromising on power, they’re also omnipresent.

But beware, Wells Fargo ATMs don’t disburse funds for free. You get charged for almost every activity you carry out at an ATM from the bank.

From withdrawals to deposits and even checking your account balance, Wells Fargo ATM fees can quickly accumulate over time.

In this post, we’ll cover Wells Fargo ATM fees, how it compares to ATM fees from other banks, and what you can do avoid paying outrageously high fees to withdraw money at an ATM.

What can Wells Fargo ATMs Do?

Wells Fargo has over 13,000 ATMs in its network; that’s so much to reach every user in the United States. But the main question is, what can they do?

Well, a Wells Fargo ATM enables you to withdraw cash, transfer money to other bank accounts, print your bank statement for a fee, and even deposit money.

Do you want to check to see if your budget supports Wells Fargo’s fees?

I’ve got you covered over here.

However, if you’re not a Wells Fargo customer and you’re making transactions from a Wells Fargo ATM, you should expect the fees to be a bit aggressive.

I’ll show you what to expect when making transactions at a Wells Fargo ATM in this section.

Do you know what Wells Fargo won’t charge you for?

While many banks will charge you for making deposits to your account from an ATM, Wells Fargo understands that the charges are unnecessary.

Hopefully, other banks and ATM operators will learn from Wells Fargo.

Just like deposits, withdrawals are free of charge. If you’re not going above your withdrawal limit for the day, you won’t have to shell out any additional charges for just withdrawing your money from the ATM.

If you have more than a dollar in your account, you can request an account statement printout from any Wells Fargo ATM in the United States.

When you request a statement printout at a Wells Fargo ATM, you will have to pay $1.00. This fee isn’t outrageous by any means. Even the paper that the ATM prints the statement on costs almost that amount.

Out-of-network fees are charged when you’re using an ATM that doesn’t belong to your bank. They are usually higher than the regular charges when you use your bank’s ATM.

The charges listed above are only for Wells Fargo customers transacting one of the bank’s ATMs. If you’re using a Wells Fargo ATM card on another bank’s machine, you should expect charges, significantly higher ones at that.

In this section, we’ll walk you through the current charges for using the bank’s ATM cards at an out-of-network machine.

If you use an ATM card from Wells Fargo to make a withdrawal from an ATM from another bank, you should expect a $2.50 fee for each transaction.

If you’re signed onto the Military Banking Program, Wells Fargo won’t deduct this fee for a while, precisely your first four transactions; prepare to shell out the fees afterward.

You can get your account balance at a non-Wells Fargo ATM using your ATM card, but you should prepare to pay the corresponding fees.

If you’ll like to check your ATM account balance at an out-of-network ATM, Wells Fargo will deduct a service charge of $2.

If you got higher fees for checking your account balance, it is understandable, as the $2 service charge is the fee for Wells Fargo. If the ATM operator charges an extra fee, it will be added to the $2 charge, driving your charges further up.

If the out-of-network fees are annoying you already, you have to wait for Wells Fargo international transaction fees.

Understandably, using foreign ATMs incur even higher costs, and they are hard to estimate accurately.

However, Wells Fargo will charge you an extra $5 for any transaction you make outside the country. Note that this is not the amount you’ll be charged for the transaction.

The fees will be significantly higher, as the $5 doesn’t include the ATM operator’s charges. Whenever you’re using a foreign ATM, you should trust that the fees will be steep.

If you are a Wells Fargo account holder and you are not ready to shell out such amounts each time you’re withdrawing from an out-of-network ATM, there are a couple of things you can do about it.

Portfolio account holders get almost no fees, even when they’re withdrawing funds from out-of-network ATMs. If you find yourself withdrawing from ATMs so often, you can use a Portfolio Checking account.

With over 13,000 ATM points in the United States, a Wells Fargo ATM will always be a few minutes away. Instead of succumbing to the pressure to use an out-of-network ATM, why not find the nearest Wells Fargo ATM?

Your wallet will thank you.

Wells Fargo ATMs are great, and they make banking over the counter useless.

But you surely won’t love everything about them, and one of the things you won’t love is the Wells Fargo ATM fees.

If you pay attention close enough, you’ll find out you’ve been spending hundreds of dollars in charges, which you can easily save.